Monica, Rhea and Naomi Dhar are a family of current, past and future women’s T&D players with a passion for squash.

Monica first got involved with squash when she learned to play in her lunch hour at the erstwhile Sports Clubs of Canada.  It didn’t take long for her to get hooked and, since she couldn’t stay away from the squash court, she got her family into it as well. As an advocate of all things squash, Monica decided to become a certified squash coach. She saw this as a great way to encourage and welcome new players to the game, particularly girls and women. Monica currently leads the Toronto Sports and Social Club Squash program which operates out of Mayfair Lakeshore on Wednesdays and Sundays, where she gets to do just that. Last season she played for Mayfair Parkway’s B team and has previously played with Mayfair Lakeshore’s B team on their 2014 division winning team! 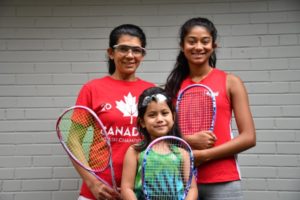 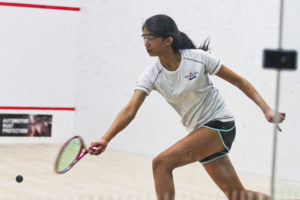 Rhea is on her way to the University of Toronto this fall where she will be playing varsity squash. As a junior she enjoyed great success as a squash player. She grew up playing in most of the Divisions in the Women’s league and is a true example of the importance and support that our league has for junior players. This last season she finished 5th at Junior Nationals (her last junior tournament) and 12th in the Senior Women’s Open Nationals! Though those of us who played her as a junior would like to think that we were her hardest challenge (especially if you beat her), she certainly will have more challenges on the court in the future. If you see Rhea at nationals or other events, make sure to give her some TDWSA support! She truly is proof of what our league’s competitive spirit and values (fair play, respect, inclusiveness, fitness, fun and camaraderie) can foster.

Monica’s youngest, five year old Naomi, is just beginning her squash career!  Keep an eye out for her, if she is anything like the other Dhar women, you could be in for a tough battle on court!